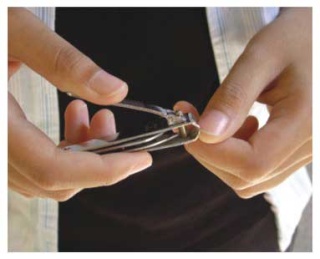 According to Matn al-Iqnaa (a name of book) of Hanbali school, it is desirable for a person who clips his/her nails to do that in the following order:

However, we believe that the above-mentioned narration concerning the order of clipping one's nails has no foundation Ibn Daqiq al-'Id, a well known a verifier and Muslim scholar, said: 'Clipping nails in accordance with a fixed order has no foundation in Sharia'. He added: 'It is not allowed to believe in the approbation of clipping nails according to the above-mentioned order, since such a desirability has no evidence in Sharia. So, it is wrong to believe this easily'.

Here, we re-assure that Ibn Daqiq al-'Id does not negate to start with the right, in general, but he negates the order among fingers (hand or leg), since the Prophetic Hadith states: "The Prophet (Sallallahu Alaihi wa Sallam) likes and prefers starting from right (hand/leg) side while wearing his shoes, combines, bathing, making Wudu and even in all his matters". [Reported by Imams Bukhari and Muslim]