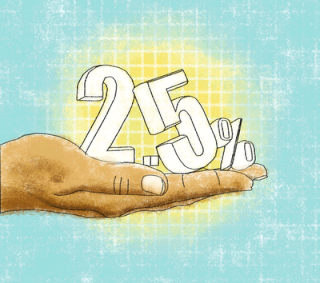 Just as Allah has created people with different colours, attitudes and levels of knowledge, so too their deeds and provision vary. He has made some of them rich and some poor, to test the rich as to whether they show gratitude, and to test the poor as to whether they are patient. Because the believers are a brotherhood, and brotherhood is based on compassion, kindness, love and mercy, Allah has enjoined upon the Muslims zakaah which is taken from the rich and given to the poor. Allah says (interpretation of the meaning):

"Take Sadaqah (alms) from their wealth in order to purify them and sanctify them with it, and invoke Allah for them. Verily, your invocations are a source of security for them"[al-Tawbah 9]

Zakaah purifies and cleanses wealth, and purifies the soul from stinginess and miserliness. It strengthens the love between the rich and poor, takes away hatred, makes security prevail and brings happiness to the ummah happy. Allah has made the payment of zakaah obligatory upon everyone who owns the nisaab (minimum amount) for one year. The rate of zakaah on gold, silver, other metals and trade goods is one quarter of ten percent. On agricultural produce and fruits the amount is one-tenth if it is irrigated (by artificial means), and one-half of one-tenth if it is not irrigated (by artificial means, i.e., it is watered by rainfall or other natural means). Concerning an’aam animals (i.e., sheep, goats, cattle and camels) the details are explained in the books of fiqh… Whoever pays zakaah, Allah expiates his sins thereby, and blesses his wealth, and stores up for him a great reward.

Allah says (interpretation of the meaning):

"And perform As-Salaah (Iqaamat-as-Salaah), and give Zakaah, and whatever of good (deeds that Allah loves) you send forth for yourselves before you, you shall find it with Allah. Certainly, Allaah is All-Seer of what you do"[al-Baqarah 2]

Withholding zakaah brings disasters and evils upon the ummah. Allah has threatened those who withhold it with a painful torment on the Day of Resurrection. He says (interpretation of the meaning):

"O you who believe! Verily, there are many of the (Jewish) rabbis and the (Christian) monks who devour the wealth of mankind in falsehood, and hinder (them) from the way of Allah (i.e. Allah’s religion of Islamic Monotheism). And those who hoard up gold and silver (Al-Kanz: the money, the Zakaah of which has not been paid) and spend them not in the way of Allah, announce unto them a painful torment. On the Day when that (Al-Kanz: money, gold and silver, the Zakaah of which has not been paid) will be heated in the fire of Hell and with it will be branded their foreheads, their flanks, and their backs, (and it will be said unto them:) ‘This is the treasure which you hoarded for yourselves. Now taste of what you used to hoard’" [al-Tawbah 9-35]

Concealing one’s zakaah is better than paying it openly in front of people, as Allah says (interpretation of the meaning):

"If you disclose your Sadaqaat (almsgiving), it is well; but if you conceal them and give them to the poor, that is better for you. (Allah) will expiate you some of your sins. And Allah is Well-Acquainted with what you do [al-Baqarah 2]

When a Muslim pays his zakaah, it is not permissible for him to give it to anyone except those whom Allah mentions in the ayah (interpretation of the meaning):

"As-Sadaqaat (here it means Zakaah) are only for the Fuqaraa’ (poor), and Al-Masaakeen (the poor) and those employed to collect (the funds); and to attract the hearts of those who have been inclined (towards Islam); and to free the captives; and for those in debt; and for Allah’s Cause (i.e. for Mujahidoon — those fighting in a holy battle), and for the wayfarer (a traveller who is cut off from everything); a duty imposed by Allah. And Allah is All-Knower, All-Wise "[al-Tawbah 9]