The Woman in Islam :: The Muslim Woman :: Menstruation 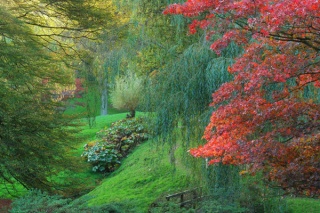 The Qur'an addresses menstruation on three occasions, two of which don't concern us in this discussion. The one ayah, which is small but holds a lot of detail is in Al Baqarah ayah 222 which can be translated as:

They ask you concerning menstruation. Say: that is an Adha (a harmful thing for a husband to have a sexual intercourse with his wife while she is having her menses), therefore keep away from women during menses and go not unto them till they are purified (from menses and have taken a bath). And when they have purified themselves, then go in unto them as Allah has ordained for you (go in unto them in any manner as long as it is in their vagina). Truly, Allah loves those who turn unto Him in repentance and loves those who purify themselves (by taking a bath and cleaning and washing thoroughly their private parts, bodies, for their prayers).

The implication of this ayah is in regards to the sexual relations between man and women during the menstrual cycle. However, we learn several other things from this ayah that applies to women and menstruation in regards to other aspects of Islam.

Adha: a hurt, injury or ailment, is the word that Allah uses to describe the menstruation of a woman. Any woman can relate to the hurt, which comes in the forms of abdominal, cramps, backache, inner thigh pain, headaches, nausea and many other symptoms associated with the menstrual flow. The severity of which will differ from woman to woman, however women suffering from Endometriosis will have increased abdominal cramps.

Tahara: cleansing or purity, Allah points out the fact that during the time of the menstrual flow women are impure. Not in the sense that everything related to her body is impure, for the menstrual cycle is not in the hands of a woman.

Aisha (radhi'Allahu anha) reported: The Prophet (sall'Allahu alayhi wasalam) said to me "Bring the mat for me from the mosque." I said: "I have got menses." He said: "Your menstruation is not in your hand"

A medically defined normal menstrual flow is considered to be one that occurs every month when a woman is not pregnant, for up to seven days, and not associated with unusual amounts of pain. However the Muslim scholars differ as to the minimum and maximum days of menstrual flow in order for it to be legally defined as a menstrual flow. The Hanafis allow three days minimum and ten days maximum, Hanbalis and Shafi'is allow for a one day minimum and maximum of fifteen days and according to the Malikis there is no minimum set time but the maximum is set at fifteen days also. However women are not programmed like a computer, the duration of their own normal flow may differ from woman to woman.

There are two forms of abnormal flows, which concern us here, the prolonged flow and the bleeding between menstrual cycles. Both of which are not subject to the same rules that a normal flow is in accordance with Shari'ah.

This is something which Prophet Muhammad sall'Allahu alayhi wasalam addressed with the women of his time.


Aisha reported that Fatimah, the daughter of Abu Hubaish came to the Prophet (sall'allahu alayhi wasalam) and said: "O Messenger of Allah, I am a woman who has a constant discharge of blood so I am not purified. Shall I give up prayer?" He said: "No, that is a vein and not menses, and when your menses comes, give up your prayer; and when the time elapses, wash the blood from yourself and then pray.


Umm Salamah reported that a woman used to discharge blood at the time of the Prophet. Umm Salamah asked the decision of the Prophet for her. He said: "Let her look to the number of nights and days in a month which she used to have menses before that which attacked her, and let her give up prayer proportionate to that in a month. When she finishes that, let her take bath and let her tie a cloth over her private part and then let her pray.

We also learn from these ahadith that the rules that are applicable to women during their normal cycle are not applicable to women during a prolonged flow. Under a normal menstrual flow a woman would not be permitted to make formalized salah, to fast during Ramadhan, although she would have to make up for days missed. She would also be prohibited from staying in the mosque, or sitting on the musallah. However if it is Eid all women are to come out for this celebration whether they have menstrual flow or not. Sexual intercourse is prohibited, however touching, kissing and other forms of foreplay are not prohibited. She also would not make tawaf around the Kabah during Hajj as well as touching the Mushaf Quran.

All four of the Mathhabs do agree that during an abnormal flow none of the above things are prohibited for her. She is to pray, fast, can stay in the mosque, make tawaf around the Kabah, touch the Quran and have sexual intercourse. The only requirement is that she makes ghusl as she normally would do after a menstrual flow. When she makes salah she would also make wudu before every prayer, however a full ghusl for every prayer is not mandated but can be the choice of the woman as we have seen in the above hadith.

This is another form of abnormal bleeding that has been addressed by Prophet Muhammad (sall'Allahu alayhi wasalam):


Narrated Aisha: One of the wives of the Messenger of Allah joined him in I'tikaf and she noticed blood and yellowish discharge (from her Private parts) and put a dish under Her when she prayed.


Narrated Aisha: Umm Habiba got bleeding in-between her periods for seven years. She asked Allah's Messenger about it. He ordered her to take a bath and that it was from a blood vessel. So she used to take a bath before every prayer.

Again we see that the same legal rulings which apply to a prolonged flow of bleeding to that of the bleeding in-between a normal cycle. So what are some of the causes for such bleeding?

Metrorrhagia, the medical term for bleeding between cycles, has several causes. Some of which are hormonal fluctuations, low thyroid levels, vaginal infections, injury to the vagina, some forms of cancer, certain medications, stress, or missing a birth control pill. Whenever a woman experiences bleeding in-between cycles from unknown causes it is best to call the doctor. You should keep track of how many pads you use; this can help determine if the blood flow is abnormally heavy. Also staying away from aspirin can help since it prolongs bleeding.

The same Muslim scholar deductions related to the prolonged flow would also relate to the flow in-between cycles. So a woman can resume all normal activities which she would if she were not menstruating.

One of the most commonly misunderstood things about postnatal bleeding is that many women think that they should refrain from all things for a total of forty days. They understand this to be the scholarly deduction if they are bleeding or not. However according to the scholarly deductions there are set maximum days just as we say in the menstrual flow. In the opinion of the Hanafis and Hanbalis the maximum amount of time is forty days, anything beyond this is not considered a normal flow of nifas and would be subject to different rules. The Shafi'is and Malikis set a maximum amount of time of sixty days. This however does not mean that if a woman's flow stops before the forty days she is to continue in a state of "impurity" rather she is to make ghusl and resume her Islamic duties.

Anas reported that Allah's Messenger had prescribed forty days for a woman in the state of nifas except that she becomes purified before this (period).


Again there is no set programming for women during these times, each women will differ as to her flow. Some bleed for a longer amount of time, some having a heavier flow, and some experiencing different color of the discharge. If a woman is unsure as to any flow she is having be it menstrual or postnatal she should discuss this with her doctor. Generally most doctors will say about six weeks of postnatal bleeding is normal and if bleeding occurs after that than a cause should be found, depending on the blood flow.

BLEEDING AFTER A MISCARRIAGE

When a woman miscarries she may experience bleeding during and after. The length of time will differ from each women but generally a woman will bleed for a few days ,a week or on and off for a few weeks. Concern should be noted if the bleeding is more than a normal menstrual flow, or when you soak a pad within an hour. There are different reasons why some women may flow heavier than others in these times such as location of implantation in the uterus, how deep embryo had implanted, condition of the uterine lining, or muscle tone of the uterus. It could also be due to ones own nutrients, such as iron, calcium and electrolytes. There are many factors, however if you become concerned over the flow of blood or amount refer to your doctor.

All the rules concerning a menstrual flow would also apply to women who bleed after miscarriage. Such as not praying, fasting, having sexual intercourse, tawaf around the Kabah.

A woman with sporadic bleeding after a miscarriage which is determined to be normal should resume her duties when she has no flow. But when the flow comes again should ceases in her duties. If the flow were determined to be of another nature than the rules regarding abnormal blood flow would also apply.

The Woman in Islam :: The Muslim Woman :: Menstruation